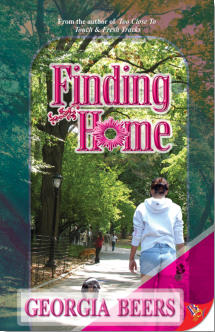 “You’re getting rigid and predictable.”

Sarah Buchanan would never have used those words to describe herself in a million years. Never. But it’s been almost a year since her long-time girlfriend left her for a man and she’s suddenly realized that those words now describe her with frightening accuracy, along with one more: boring. Deciding it’s time to escape her disaster of a life, at least long enough to turn it around, she takes a temporary position with her company overseas. The hardest part is leaving her blue-eyed dog, Bentley, but at least he’s in the capable hands of her family. She thinks.

Natalie Fox is the exact opposite of Sarah. She’s flighty, spontaneous, and lives in The Now. It’s the way her parents raised her and for better or worse, Natalie loves her carefree life. When she finds a stray, skinny, terrified dog with blue eyes outside the bakery and decides to adopt him as her own, things seem just about perfect to her.

Take two stubborn, polar opposites with an attraction for one another they’re trying desperately to ignore; throw in a couple of wise Italians, a handful of quirky friends, some homemade cannoli, and a far-too-observant dog; stir vigorously, then sit back, relax, and enjoy…